Tashkent-the capital of Uzbekistan republic-is one of the ancient cities appeared on the cross of the Great Silk Road from China to Europe.
First information about Tashkent as city settling is in the ancient east sources of the second century before A.D. In China sources it was called Yuni; in the inscription of the year 262 B.C. of Persian king Shampur the First on the “ Caaba of Zoroastrian” Tashkent oasis was called Chach; in the transcriptions of some china sources the city also was called Shi, and in the Arabian-Shash. By the sayings of Biruniy and Mahmud Kashgariy, the name Tashkent was appeared from the Turkic sources of 9-12 centuries. In Russia in 15th century it was famous as Tashkura.
Already in the ancient times advantageous geographical location and favorable climate make Tashkent one of the main points at the trade road of “ the Great Silk Road”. In support of this suggestion by archeologists of Uzbekistan in the south part of modern Tashkent, irrigated by the Jun River, were found remains of the settling of city type-Shashtepa. Ruins of defensive armed wall, round citadel with building from the moisture bricks and pahsa inside it were discovered. Outside defensive wall of citadel included inside vaulted corridor and was designed outside with tower shape ledges, which means it was built taking into consideration fortification motion of its time.
The main square of the old city market-Chorsu Square-appeared in 9th century. Trade Roads came to Chorsu from all gates, transforming to market streets. This square was transport flyover and trade place.
In the 6th century Kukildosh Madrasah was built here.
Chorsu mahallya, Tikanli mazar, Chukur village were situated on the modern part of Chorsu Square. In the modern period Chorsu was reconstructed. GUM, Central City Drugstore, Chorsu Hotel and other constructions of modern architecture were built. Mahallya appeared around old squares and market streets, which in most cases were called by the activities of craftspeople. 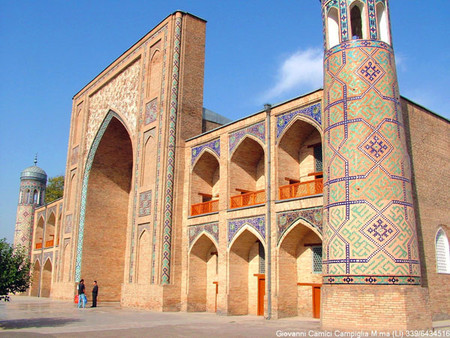 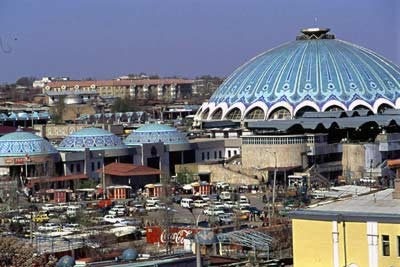 For example, Padarkush Mahallya in Shayhantaur was called earlier “Buzchi Mahallya”, which means “block of weavers” (now it is microrayon C-13). There were other mahallyas near: on the north-Arka-Kucha, on the south-Dukchi, Zandjirlik, on the west-Pushtibag, on the east-Kudukbashi. Deroz Mahallya or Degroz in Shayhantaur got its name from “Degroz”-“founder of boilers”. Here were 20 cast-iron workshops. There was Ahunguzar mahallya in Sibzar daha, which means “block of farriers”, here were situated in big amount farrier’s workshops. And Tokli Jallob mahallya got its name because people there were trading cattle.
Since Tashkent was city of rich merchants and craftspeople big architectural buildings were mainly tied-up with constructions and design of caravanserais, mosques, and mausoleums.
The earliest buildings that reached our time are mausoleums, appeared along the caravan roads, they were devoted to saint sheikhs, and they were not only the places of worship, begging luck in life and trade work, but also original landscape, decorating long boring way on the desert roads.
In Tashkent City and along the routes to it remained some ten of such mausoleums.